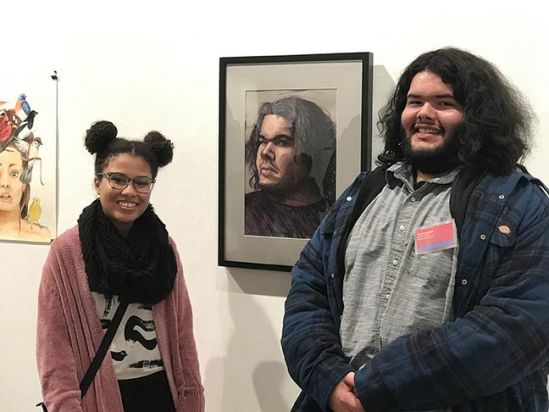 Graphic Design major David Molina of Bridgeport learned he received the scholarship to the art school at the University of Hartford based on the merit of his submissions.  HCC Fine Arts major Stephanie Marrero and Graphic Arts major Dwight Richards, both of Bridgeport, also had art selected for the exhibition in the Donald and Linda Silpe Gallery in West Hartford.  Students chosen were eligible to compete for various scholarship awards, including full tuition worth approximately $36,000 a year.

Thomas C. Brenner, HCC assistant professor of Art & Graphics, attended the exhibition and said he was thrilled with the success demonstrated by his students.  He recommended the students and noted that all six pieces selected for display were produced in his drawing and illustration courses.  Submissions included self-portraits and still life works.  He added that the Hartford Art School has a beautiful gallery.

"On behalf of the college community, I congratulate Stephanie, David and Dwight for being selected to exhibit their work at this prestigious event," said HCC President, Paul Broadie II. "We are proud of their work, and offer a special commendation to David for winning the coveted scholarship. They make us all Community College Proud."

Students eligible to compete for the scholarship were enrolled in any state community college or one of three Massachusetts community colleges and had declared, or planned to declare, a fine art/studio major.  Portfolios, artist statements, letter of recommendation, and unofficial transcripts were considered.

Brenner added that this is the third consecutive year that HCC students have managed to have their work chosen for the Community Transfer Student Exhibition, so it was particularly special to have had three students make it this time.  Two years ago, two students had their artwork selected and last year, one student managed to get to this stage in the scholarship round.