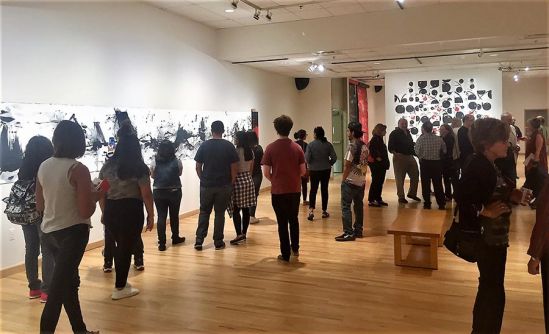 The exhibition runs through December 1st, and several related programs are planned, including two gallery talks on September 19th and October 3rd discussing the pirates that came ashore and buried treasure in Bridgeport. Additional programming will cover the topic of famous women pirates, as well as a lecture with the artist. A pirate-themed cocktail fundraiser to benefit the museum will be held on September 29th. To learn more, visit www.HousatonicMuseum.org or call 203 332-5052.

“Joe Zucker has mined the history of pirates in our area, including rumors of Captain Kidd burying his treasure in Bridgeport, Milford and on Gardiners’ Island, and created beautiful artwork to celebrate those accounts,” said Robbin Zella, Executive Director of the Housatonic Museum of Art. “If you love pirates, you’ll love this show."

“It’s a perfect space for the exhibit,” said Zucker. “The exhibit is all about the metaphor of pirates; there is the stealing, but there is also the romantic side, the Robin Hood issue, there’s a duality. In the show you can see literal imagery of pirates, but if you know about 20th century painting there is something for those people too.”

The Housatonic Museum of Art is located at 900 Lafayette Blvd. in Bridgeport, CT, and gallery hours are Monday through Friday, 8:30am - 5:30 pm, Thursdays until 7pm and Saturday 9am – 3pm. www.HousatonicMuseum.org

Joe Zucker’s work is in the collections of The Art Institute of Chicago; Museum Sammlung Ludwig Aachen, Cologne and Vienna; The Metropolitan Museum of Art; Whitney Museum of American Art and the Museum of Modern Art to name a few. Zucker in the recent past has participated in a number of group exhibitions, including, Exile on Main Street, Bonnefantenmuseum, Maastricht, Netherlands (2009), Image Matter, Mary Boone Gallery, NY, NY (2010) and Midtown presented by the galleries Maccarone, and Salon 94 at Lever House (2017)

About the image: A crowd of museum-goers, collectors, art lovers and pirate-enthusiasts attended the opening reception of Scrolls, an extraordinary pirate-inspired exhibit at the Housatonic Museum of Art. Exhibit remains on view through December 1st, with related programming open to all. www.HousatonicMuseum.org