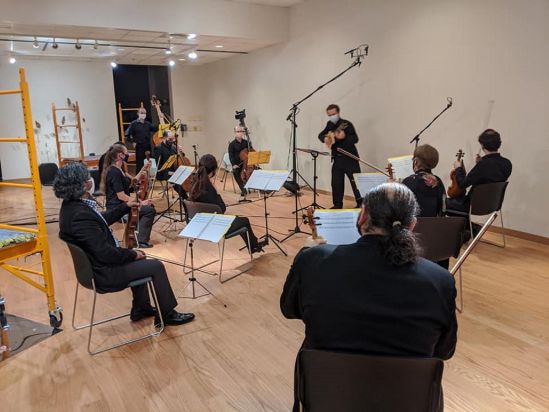 Beginning November 7 featuring a performance by the American Baroque Orchestra in Partnership with Housatonic Museum of Art.

The program was recorded in the Housatonic Museum of Art’s Burt Chernow Galleries on Friday, October 23rd, and took inspiration from the currently running exhibition “Little Liberia” and an exhibition on view at that time, sculptor Rachel Owens’ “The Hypogean Tip,” which explored Bridgeport’s past, including Little Liberia. “The Hypogean Tip” exhibition was comprised of sculptures, such as large-scale casts of jewel-toned colored glass from the porch of the home of Mary Freeman (listed on the National Register of Historic Places).

The performance brings together the history of Bridgeport's Mary and Eliza Freeman Houses with music of the 17th through 19th centuries, highlighting overlooked composers of African descent. Just as the front porches of Little Liberia served as platforms for community discussion, the online performance imagines the intersection between inspired and accomplished composers of African descent who flourished in Europe, and the free black community that built Bridgeport's Little Liberia in the early 19th century.

The program will include music and melodies from the historic Little Liberia community, as well as composers including Joseph Bologne (1745-1799), George Bridgetower (1778-1860), and Ignatius Sancho (1729-1780), who also happened to be the first person of African heritage to vote in a British election.

“The early 19th century Bridgeport neighborhood Little Liberia was a safe haven for free Blacks, runaway enslaved persons from southern states, and individuals from Native American tribes in Connecticut. Front porches were a gathering place, and this concert captures the spirit of that gone but not forgotten community,” said Robbin Zella, Director of the Housatonic Museum of Art.

About the Housatonic Museum of Art

All of ABO's concert presentations and lectures align with the goal of presenting music in a way that connects with people today through the historical circumstances and cultures of the past. Beginning in 2016, the American Baroque Orchestra presented its first Summer Choral Festival, geared toward the education about the history and performance practices of the past. Following the 2016 Festival entitled “Choral Gems of Baroque Italy,” in New Haven, Connecticut, the organization was invited to present this program in the San Francisco Bay Area.

The American Baroque Orchestra has had the opportunity to serve a diverse range of audiences throughout New England, New York, and the West Coast. ABO’s takes a particular interest in connecting with audiences who are new as listeners to historically-informed performance and its educational components. The majority of our concerts are free and open to the public, enabling individuals from all socioeconomic backgrounds to be exposed to the magnificent qualities of historical music and its cultural relevance today. Furthermore, the American Baroque Orchestra fosters openness and diversity through its programming of composers from near-forgotten cultures, promoting an attitude of cultural acceptance today.

Caption For Photo Above: On November 7th enjoy a free online performance by the American Baroque Orchestra in the Housatonic Museum of Art galleries entitled, “Little Liberia: Music from their Front Porch.” www.HousatonicMuseum.org