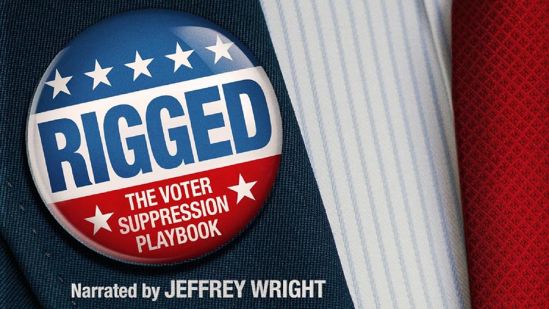 As the race for the 2020 presidential election is heating up, the Housatonic Museum of Art (HMA) and the Connecticut Film Festival invite you to a free screening of the film RIGGED: The Voter Suppression Playbook. This documentary examines how, since 2008, right-wing groups have worked with certain states, to make it harder to vote, particularly for minority groups and young people. The event will take place on Friday, October 4 at 6pm in the Beacon Hall Event Center on the Housatonic Community College campus.

Shot principally during the 2016 election, RIGGED tracks a systematic, decade-long effort to suppress votes at scale and reverse the growing demographic tide of new, young, non-white voters who helped elect President Barack Obama in 2008. It details a variety of voter suppression “plays,” or tactics, ranging from the purging of voting rolls and passing of new, restrictive voter ID laws to gerrymandering and voter intimidation. The film also includes interviews with Republican strategists detailing how the game was played as well as interviews with leading voting rights advocates, law professors, demographers and Democratic strategists.

A meet and greet with Emmy-award winner Tim Smith, co-executive producer of RIGGED, will begin at 6pm, followed by the film screening and Q&A at 7pm. Housatonic Community College is located at 900 Lafayette Blvd. in Bridgeport, CT.

“This acclaimed documentary investigates voter suppression and ignites debate on the steps we must take to defend our country’s democracy, said Robbin Zella, HMA director. “ We encourage all voters, regardless of political affiliation, to come hear this powerful exploration into protecting our right to vote.”

The Housatonic Museum of Art is located on the Housatonic Community College campus, located at 900 Lafayette Blvd. in Bridgeport. It is home to one of the premier college art collections in the United States. The museum’s collection offers the opportunity to view works that span the history of art from the ancient to the contemporary, and is on continuous display throughout the 300,000 square foot facility. Visit www.HousatonicMuseum.org to learn more.