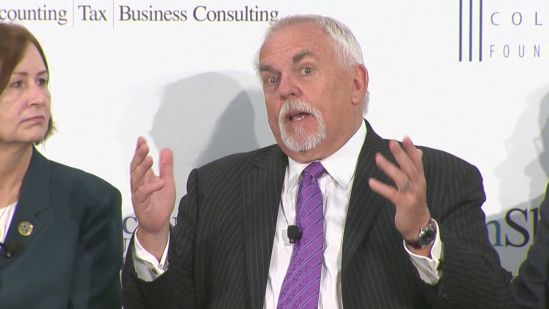 The student program took place simultaneously with the media introduction to the Hall of Fame.

With Ratzenberger’s involvement, the Hall’s mission will be to raise awareness of the positive aspects and solid economic sense that Advanced Manufacturing brings to U.S. communities, and to raise funding for manufacturing students and programs to create American jobs.

Future plans include creation of a museum that will permanently house the Hall and feature rotating manufacturing exhibits and an interactive manufacturing learning center. The museum will be located in Bridgeport, a powerhouse of manufacturing in the United States for decades.

At the media launch, the first inductees into the Hall were announced. The first inductees were selected from an exhaustive list of Bridgeport area manufacturers from three eras that roughly break down to the following; Pre-World War II, Post WWII through the introduction of the Personal Computer, and the contemporary period from the PC to the present age. The Hall will expand regionally and then nationally in selecting inductees that have significantly impacted American life and the economy.

Ratzenberger will serve as the Inaugural Chairman of the Hall’s steering committee. The well-known film and television actor is most often associated with his roles in Pixar animated films, as the former host of the television series “Made in America” and the producer and future host of the series “American Made.” Ratzenberger is a Bridgeport native with strong community and family ties and currently splits his time between CT and Southern California.

The media launch comprised of brief opening remarks by Anita Gliniecki, President of Housatonic Community College, a press conference with Ratzenberger, public dignitaries and steering committee members who announced the inaugural class of the Hall, a panel discussion with area manufacturers about the most pressing concerns to advanced manufacturing in CT, and a brief discussion on cutting edge technology that is changing the face of manufacturing. CT State Senator Andres Ayala, (D – 23rd district) also attended the event.

Inductions will take place each year in October, National Manufacturing Month. The inaugural induction will take place on October 7, 2014 in Bridgeport at HCC. Companies nominated for induction must go through multiple committees before reaching the selection committee, where final decisions are made. All selections are the independent choices of the committees.