By  Kerri Lloyd
in Featured
(1 Vote) 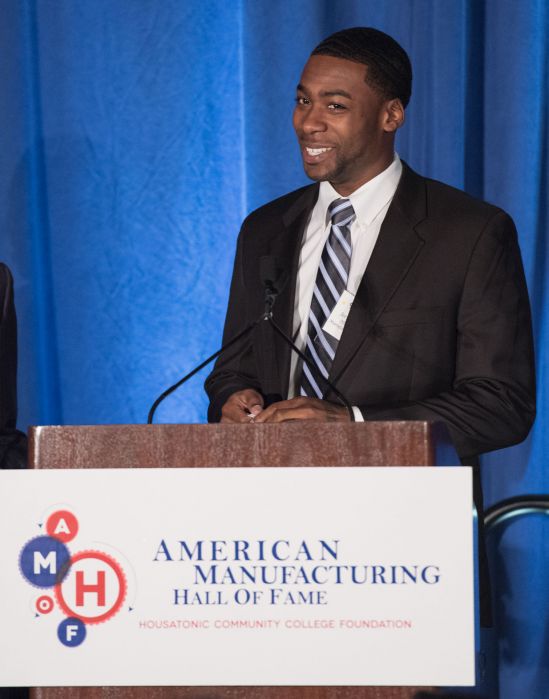 Jermaine followed his interest in how and why things worked when he enrolled in the HCC Advanced Manufacturing program and began learning the intricacies of modern, lean manufacturing. He learned about metrology, modern machine operation, CNC capabilities and more. He found he was able to grasp both concepts and operations easily, receiving top grades in his class.

He also demonstrated leadership ability and determination. These attributes led him to an internship at Balding Precision where he worked on Fridays while completing his studies at the HCC Manufacturing Center. Upon graduation he was offered a full-time position at Balding.

Jermaine spoke with ease and knowledge at the Hall of Fame event. He displayed poise and his knowledge about, and talent for, current day manufacturing. He bantered confidently with U. S. Senator Blumenthal, whose speech he followed and who was clearly impressed with Jermaine’s professional demeanor.

The following is an interview with Jermaine conducted by HCC’s PR Assistant, Kerry Lloyd.

KL: What brought you to Housatonic Community College?

JB: I saw a newspaper article about Housatonic and how the Advanced Manufacturing Program was cutting edge and changing people’s lives.

KL: Were there any obstacles you had to overcome before or while attending the college?

JB: I was completely broke for a whole year while in school. I had to really resist the urge to quit by believing it would all work out in the end.

KL: Why did you choose manufacturing?

JB: I found a passion for creating and a huge purpose in being a part of innovation. I especially fell in love with it when Housatonic taught me how deeply rooted our state of Connecticut is in the trade historically.

KL: How did the program prepare you for the job market?

KL: What helped you succeed?

JB: I gained new friends in the program who kept me motivated and the teachers all believed in me to the point where quitting wasn’t an option. My experience at HCC will always be a highlight in my life.