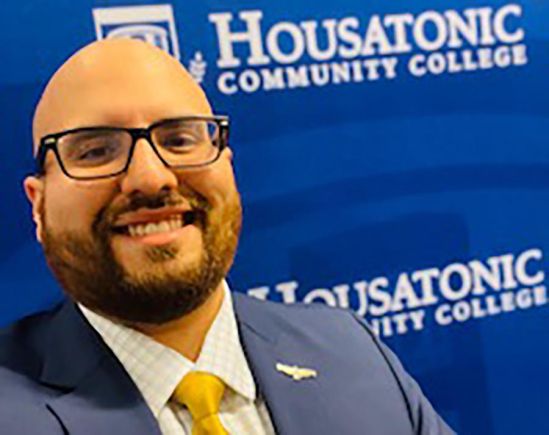 Alexandros Valiantis has a long history with Housatonic Community College and the Bridgeport area. Alexandros is a first generation American of Ecuadorean and Cypriot heritage born and raised in Queens, New York where Alexandros parents met then raised a family before relocating to Connecticut in 2002. Alexandros recalls exploring the city of Bridgeport after school post moving to Connecticut with his parents who were both in real estate and would bring their kids along for showings all around the city.

Bridgeport felt very much like New York as the vibrant communities here reminded him of the world he knew before moving. At age 15, Alexandros began working at the family car dealership “Affordable Motors” on Grand Avenue in Bridgeport and credits his time there as crucial for the development of soft skills which he utilized later in his academic journey.

When it came time to go to college, Alexandros chose to stay relatively close to home by attending Central Connecticut State University (CCSU). Reality set in very quickly that college would not be like high school, where he could coast by without putting much effort. After one semester he found himself on academic probation by the slimmest of margins, a 1.99 GPA, in part due to being in a major not suited to his strengths.

Alexandros took classes a Housatonic during his winter break to earn credits and save money, plus catch up since he started off his college career on the wrong foot. Those classes at HCC proved to be a critical factor in his readmittance to CCSU later that year. Readmitted and refocused, Alexandros switched from Civil Engineering to Economics and went back to CCSU with a goal of proving he belonged in Academia.

Housatonic Community College was not only big for Alexandros’ own journey but also for the women in his life. Following the 2008 Mortgage Crisis the real estate industry was greatly affected, and his family would be affected in particular. His mom decided to go back to school and began her journey by taking classes at Housatonic Community College. His mother who had last been a student in the 1980’s, unable to finish college herself, was able to start again as an adult learner at HCC. Today she is an accomplished Registered Nurse who’s second career became possible by starting at HCC.

Alexandros’ sister had a non-traditional college path and was a young mother; HCC allowed her to take classes that fit her schedule better than a traditional 4 year institution. She began her journey at HCC and is now a Licensed Practical Nurse.

“It was really huge for my family to have Housatonic to allow us each to transition to something else,” said Alexandros, “and we all experienced it in different ways. When I saw the opportunity to work here, I jumped on it because it fit so much with my own personal story.”

While attending CCSU, Alexandros got very involved in student organizations, becoming a leader on campus through his various involvement. Those experiences led him to earning an internship in the Obama administration in 2015. Alexandros spent the summer of 2015 in the Eisenhower Executive Office Building, interning in the Office of Public Engagement. There, he planned events, managed correspondence, and served as the face of public engagement to Latino and Immigrant constituencies.

“It was a great experience, and nothing I could have imagined for myself or anyone in my family as a first generation American, I met the 44th and 46th president of the United States and took my immigrant parents on a private tour of the White House,” said Alexandros.

Alexandros saw how doors opened up for him as a result of his experience in being engaged as a student leader, and how the skills he honed in the various organizations he was involved with as an undergrad allowed him to thrive professionally. Following his internship, he worked as a program coordinator for several educational nonprofits. He knew educational leadership was something he wanted to go into because of what a difference it made in his own life.

In his role as Men’s Center Coordinator, which began in November 2021, his goal is to make the Center a resource hub for students. While the Center has a mission to increase, encourage, and support the inclusion and educational success for males of color, it is open to all those who identify as male.

“If you’ve got a question and don’t know where to go, come to us and we’ll put you in contact the great resources we have available on campus. My goal is to connect these men with the resources they need to help them follow through and excel here at HCC,” said Alexandros.

In his role, Alexandros is a success coach for the Equity Project. Working with the Women’s Center, he puts on events, workshops, and provides one-on-one coaching. In his coaching approach he feels that many students can relate to his story as a first- generation American who did not necessarily see himself reflected in academia and hopes to inspire these scholars to excel in their own paths.

“I was them 10 years ago. I’m from a working-class family with not a ton of opportunity just trying to make it here in America. I found opportunity in student activities, getting involved on campus, and I want to focus on helping young men figure out how to tap into that. How to develop into student leaders, and find opportunities,” he said.

He continued, “I work with them, finding out their strengths, and what their goals are to keep them on pace to attain the things they aspire for. A lot of it is discipline, you have to see what you want and then you go for it; you have to hold yourself accountable.”

As a community, we can look forward to a number of Men’s Center events coming up this fall, and planning events is an area where Alexandros thrives.

“Once you’ve experienced running an event at the White House, you know you can handle a high stress environment,” he said. “I feel very cool in high pressure situations, I’m very good at pivoting and seeing what needs to be done.”

The 2022-23 academic year will kick off with Latino History Month programming, followed by a wide variety of activities throughout the year, including movie nights, game nights and even an exhibit in the HMA gallery beginning January 16, 2023\ on the history of housing in Bridgeport. Look for co-sponsored events in collaboration with clubs, and most especially the Women’s Center.

There are work study employment opportunities, which will be promoted at tabling events to raise the Center’s visibility. The Center, which is located in Beacon Hall, room 326, is also undergoing a renovation this summer and hopes to welcome students back in the fall by hosting small gatherings in the newly renovated center.

The key message Alexandros want’s people to know is, “We’re here for student success. The Men’s Center is a resource hub, a center with people here to help you be your best at Housatonic.”

Alexandros is an avid concert goer and NY Knicks fan who loves taking the train into the city to catch a show or game at Madison Square Garden. He has a love of music, and enjoys music production in his spare time.