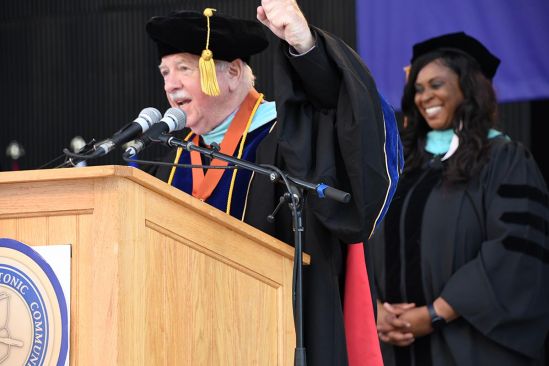 Serving nearly the entirety of the college’s existence.

Since 1970, Keane taught psychology and human services courses, and served as Coordinator of the school’s Human Services Program for 50 years. Keane developed the first Human Services Associate’s Degree Program in New England, and it was among the first in the country.

When Keane began his career, HCC was still in its nascent stages, having just become an independent institution in 1967–no longer a branch of Norwalk Community College.

“When I started, the college was located in Stratford, and all the faculty and administrators shared one room. We had to share desks and coordinate schedules to use them. There were no permanent classrooms, we taught in rented space at Stratford Library and Grace Lutheran Church, among other places,” said Keane.

In January 1971, HCC moved to the Singer Metric Building at 510 Barnum Ave. in Bridgeport, its home for nearly 30 years.

“The college greatly expanded, but I personally missed that mixture of being in and teaching in the community. I believe that community college really needs to be in the community, reaching out to keep that connection,” said Keane.

In fact, it was that close connection to community that brought Keane to Housatonic. During graduate school he did similar work in Roxbury, Massachusetts with some low-income areas.

In his time at HCC, which is now located at 900 Lafayette Blvd. in Bridgeport, Keane has seen his students go on to become agency directors, providing opportunities for current HCC students to complete internships. Today, nearly all of the adjunct professors in the school’s Human Services program are HCC graduates.

“Gino Auriemma sees former players come back and become assistant coaches for him. I have folks that go into leadership agency positions and they come back and teach – that’s a highlight,” said Keane.

Another memorable moment was when the college received its first accreditation. Keane remembers being part of the team that worked on the effort and when the award was given.

“It was so exciting because we had done so much work. It was a huge moment, we put this whole college together. We met at faculty members houses on the weekends, it was a completely different atmosphere. The award was given up in Boston and I drove up in a snowstorm to be at the ceremony. It was a big deal, we got a five-year accreditation, which was unheard of at the time,” remembers Keane.

This past May, Keane served as Grand Marshal at HCC’s 54th commencement exercises, his fourth time with that honor, following a tradition that the position be held by the school’s most senior faculty member.

“In the last 51 years, with an unwavering passion for bettering our community, Professor Keane has helped to make Housatonic the great learning institution it is today. He was an anchor for shaping our Human Services program and our college, all while helping Housatonic to fulfill our mission,” said Housatonic Community College CEO Dr. Dwayne Smith.

Keane hopes to continue teaching part-time at HCC, and plans to devote more time to the many professional organizations he works with. He currently serves as President of the International Society for Police and Criminal Psychology, is active in Rotary Club and was awarded the Paul Harris Fellow of Rotary International.